Alumna Emmylou Harris’ first performance on campus since the 60s was one for the ages.

The auditorium was packed. The Class of 1969 cheered their classmate from the front rows.

The upbeat “Here I Am” opened the show. She encored with the country standard “Together Again” and then the song she called the first great one she herself wrote, “Boulder to Birmingham.”

She had starred, along with Sandra Hopper (now Dr. Sandra Hopper Forman) ’66, ’71 MFA, in Shakespeare’s “The Tempest” on that very stage 54 years earlier. Sandra was on hand for the concert.

At a simple reception in Alumni House’s Virginia Dare Room, Chancellor Gilliam praised Emmylou’s transformative career and her work for important causes – and announced she would receive an honorary degree this spring.

At a Q&A in Brown Building’s Sprinkle Theatre, she regaled the roomful of music lovers with stories of Tate Street’s Red Door in the 60s, Bob Dylan’s “Desire” recording sessions, Gram Parsons, the Gibson guitar she bought at a downtown Greensboro music store (she still has it), and much more.

Alumnus David Giddens ‘71, who attended with wife and retired professor Lorraine Shackelford, was on hand as well. He spearheaded putting together a singer-songwriter-friendly “coffee shop” space in Elliott Hall in 1965 where he, Emmylou, Barbara Wesley (now Dr. Barbara Wesley Baker) ‘69, and any others who wanted could perform on weekends. He enjoyed Emmylou’s singing then – though he never sang with her – and he enjoys it now. Her rendition of “Abraham, Martin, and John” was a favorite that evening.

His younger daughter, alumna Rhiannon Giddens, will receive an honorary degree this year, as will Emmylou.

Many fans had a connection with Emmylou. Whether they’d lived in the Quad with her, enjoyed her decades ago at the Red Door, or just immersed themselves in songs like “In My Hour of Darkness” or “The Pearl,” they relished Emmylou’s homecoming.

It was a red letter day with the “Red Dirt Girl.”

3 CHORDS AND THE TRUTH

Emmylou opened up about her life and what she’s learned along the way.

On Tate Street “I had a Gibson J-50, and I would go down to the Red Door. … They would unplug the jukebox and set a mic in front of you. Ten dollars and all you can drink. Even to this day, I’ve never acquired the taste for beer, so I was underpaid.”

Great UNCG teachers “I had a fantastic history teacher, named Walter Luczynski. … He made world history come alive for me. In fact, if I hadn’t been a musician, I would’ve probably either gone to veterinary school or I might have become a history teacher.”

Her calling “I just had no interest in music, if I’m honest with you, until I picked up the guitar. And it was like the heavens opened and when I learned my first chord, that was it. … I didn’t ever think I would make a living playing music, but I realized eventually that that was my passion: the guitar. I still only know three chords though.” 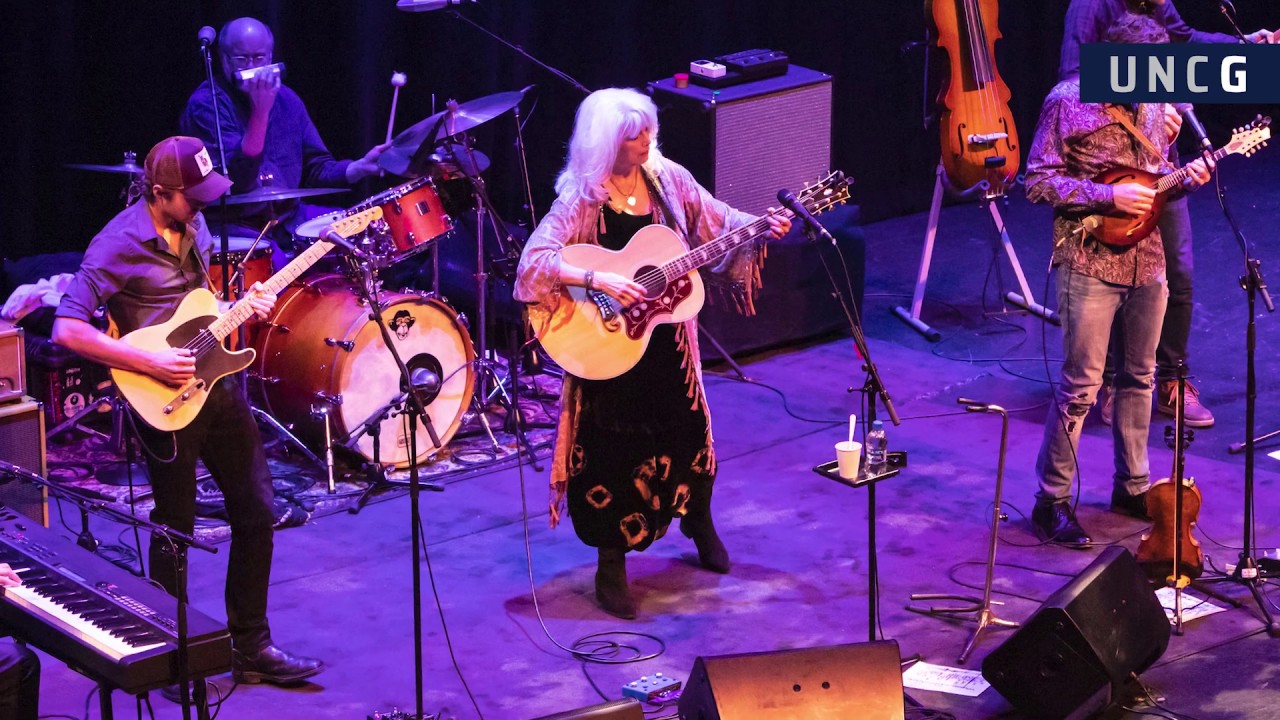